It’s inspirational African Savannah artwork meets slot gaming in the Pragmatic Play creation Great Rhino, played on 5 reels and 20 paylines! Here, you spot nature at its wildest with rhinos, cheetahs, crocodiles, hyenas and flamingos. Wilder still is the set of features that include poker chip wilds, acacia scatters, 10 free spins and super re-spins. Unearth the Major Jackpot or Grand Jackpot for up to x375 or x500 total bet! There’s no need to visit Africa to roam the range to hear and see these thundering giants – just follow the link below!

The heat will hit you in waves with this next Mexican-themed inferno of a slot called Chilli Heat played on a sizzling 5-reels and 25 paylines. The game, from Pragmatic Play, is so hot that even the reels are on fire! In Mexico you’ll find sombrero wearing men, Chihuahuas, tequila shots and chilli & tobacco sauce. Amongst the features, you’ll find the Chilli Heat wild, sun scatter, 8 free spins and money respins for the chance to open a bag stashed with Mini, Minor or Grande Jackpots. If you’re a fan of Mexican themes, and we bet you are, then why not crack open a cold cerveza and start spinning to win?

Pragmatic Play invites you to embark on an evening hunt in Wolf Gold, for the chance to track down one of three progressive jackpots! The artwork is stunning and if you’re quiet then you’ll even catch sight of a bald eagle, thundering buffalo, wild mustang and mountain lion. Listen to the sound of the flute which reinforces a surreal environment as well as the call of the lonely wolf in the distance. The 5-reels and 25 paylines slot comes equipped with wolf wilds, horizon scatters and 5 free spins + locking reels for oversized wins! Keep an eye out for the money symbol for your chance to win the  mini, major or mega jackpot prizes. Answer the call of the wild for sightings of wild animals, great features and spectacular jackpots!

The gods Anubis and Horus guard the reels as you seek to collect 1,500 coins per payline in the Netent slot Coins of Egypt. Here, the 5-reels and 20 paylines can hold the gods Bastet, Anubis, Horus and Osiris. This slot is armed with scarab wilds, free spins and the Pharaoh Coins Win feature to entertain you. The free spins present the possibility of unlocking one of three treasure chests and the Pharaoh Coins Win feature rewards random coins. If you’re ready to resurrect an Ancient Egyptian past long forgotten, then play Coins of Egypt to tap the treasure of the god!

Pragmatic Play taps the power of the Nine Worlds of Norse mythology in the 5-reels and 25 paylines slot Asgard. Your goal is to unlock the bounty of 2,500 per payline with some divine intervention from the gods and goddesses: Odin, Freyja, Loki and Thor. Home to the AEsir tribe of gods, the full beauty of Asgard is on display as well as a great soundtrack. Feature wise, you’ll find the logo wild and four separate spin features. These can either transform poker symbols into wilds, stack a reel with wilds, randomly positions mystery symbols or add wilds to random positions on the middle three reels. Finally, you can unlock the 5 free spins feature. Invoke the help of the gods to win! 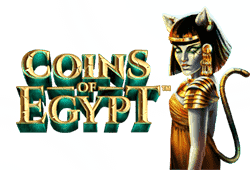