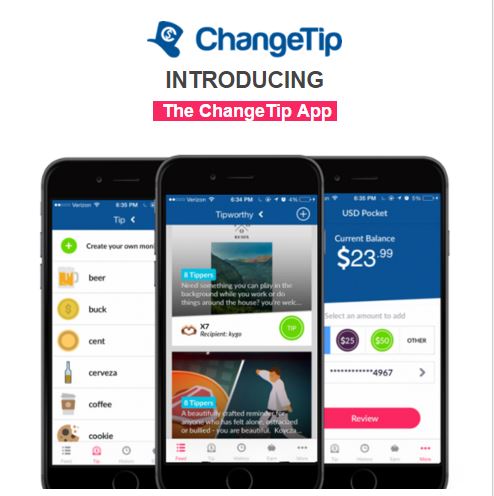 ChangeTip on Monday, November 2nd, 2015 released its iOS app. Through it, users can now tip on twitter, Facebook, email and even text. Before this development, users could only access the service through a browser or by mentioning those they wanted to tip on the social networking sites alongside ChangeTip and the amount to send.

ChangeTip is a micropayment service that enables online tipping using Bitcoin. Though the company is based in California, USA, its services are available to users from almost all countries.

Online tipping is believed to be a Bitcoin use case that could revolutionize how people consume content online. This is because it offers an opportunity for consumers to appreciate good content by tipping the creators. ChangeTip seeks to make the transfer of the small amounts of value involved frictionless, seamless, inexpensive and fast. It also wants to add an aspect of fun it.

It is only iOS for now

According to ChangeTip, the app is designed to enable users to buy and load Bitcoin directly using their phones. Recently, the company made it possible for those not interested in Bitcoin to use dollars for tipping instead on the platform.

The company has not mentioned, by the time of writing this article, any plans to have their app available for other mobile operating devices aside from iOS.

Press release; “The new mobile application works on iPhones. Upon opening the app, you are taken to directly to #Tipworthy, an experiment on generosity for content on the web. Users can post directly to the feed by tipping the content themselves.”