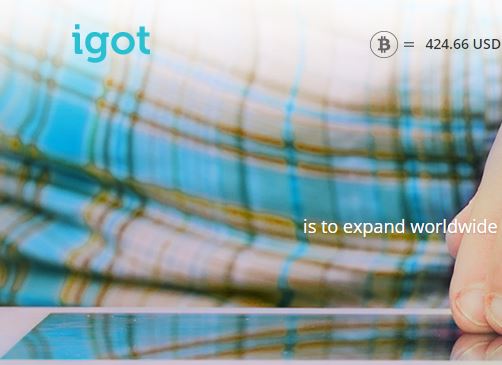 Igot is an Australian headquartered Bitcoin exchange that describes itself as the fastest growing globally. On its website, it lists regional offices in Australia Singapore, Hong Kong, India and Slovenia that together gather for over forty countries around the world.

As the month of March 2016 comes to an end, signs started showing that all was not fine within the startup. Suddenly rumors were making rounds on Bitcoin forums such as Bitcoin and BTC subreddits that the exchange was collapsing.

While there has not been formal confirmation or denial of this from Igot, there is every sign that the exchange is facing fund flow issues. Most notably, users are being welcomed by the following message when they access their accounts:

Indeed, this could be an indication that quite a few people are finding it hard to withdraw their funds.

Incidences of Bitcoin exchanges failing are common. In many of these cases, users have ended up losing significant amounts of their money.

The most recent case is Cryptsy. In January 2016 users could not withdraw their funds from the exchange. The company, later on, explained that it had been a victim of a hack heist.

But the most notorious was the Mt Gox, which was the first very successful Bitcoin exchange. I March 2013 it went down with over 800,000 of clients’ bitcoins.

As a Bitcoin user, you may not avoid the services of exchanges, especially with the need to move between fiat and cryptocurrencies. However, it is advisable not to hold large amounts of bitcoins there. This is even more so where the exchanges also act as wallet service providers.

Read also Coinbase is not a Wallet; Brian Armstrong, its CEO, Says