Based on one of the most famous monster movies of all time, King Kong Fury from NextGen Gaming is a 5-reel, 4-row and 50 fixed paylines bitcoin slot with up to 250 coins per payline up for grabs!

The bitcoin slot is set in the remote and dangerous location of Skull Island. The top-paying regular symbols include five different dinosaurs: tyrannosaurus, triceratops, snake, pterodactyl and mantis-like insect. The lower-paying symbols are the popular five poker icons. Overall, the illustrations as well as the epic audio effects increase the excitement of the game.

There are several features to make this bitcoin slot interesting which start with the King of Skull Island Free Games triggered by the bonus scatter symbol on the 1st and 5th reels together. You first need to spin the statue reels to reveal the number of free spins for up to 100 with Raging Re-spins. The Raging Re-spins is triggered with fully stacked wilds on a reel entitling you to an additional free re-spin with the stacked wilds remaining sticky. The Kong symbol is a wild, substituting for any other symbol, when he arises on the 2nd, 3rd or 4th reels. The Lightning Reel is randomly triggered after any spin and adds up to 15 Beast symbols for some large wins. Kong’s Call is another randomly triggered feature that commences with a native chant in the background which summons Kong who adds up to 12 wilds.

King Kong Fury bitcoin slot is available on mobile, desktop and tablet so play it when you’re on the move using your Windows Phone, Android or iOS device.

Wild-Symbol: The Kong wild appears on the 2nd to 4th reels and substitute for all but the scatter symbol.

Scatter-Symbol: The bonus symbol acts as a scatter and rewards 100 coins when appearing on the 1st and 5th reels.

Free spins: When the scatter appears on both reels, free games are triggered, the number of which is determined by a spinning wheel for up to 100.

Bonus rounds: The Lightning Reel adds up to 15 Beast symbols for some large wins and finally Kong's Call summons Kong who adds up to 12 wilds. 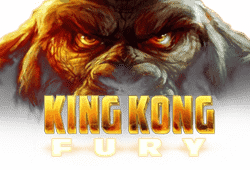 Answer the gladiator’s call, prepare to be shocked, meet the Sand Princess, enjoy a gritty crime or Kong’s fury with Nextgen, Betsoft, 2x2 Gaming or Netent.